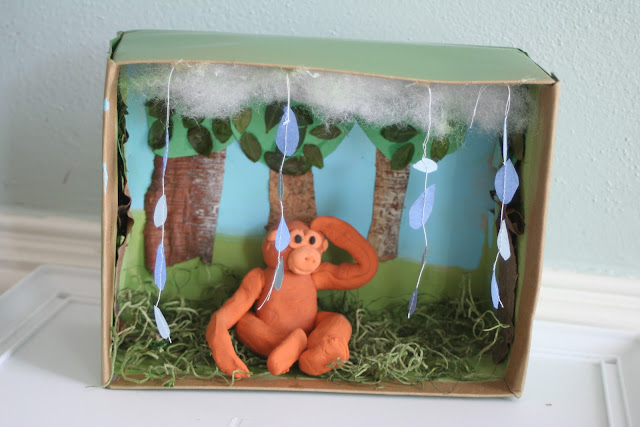 If you had told me that I'd be dealing with large projects and grading rubrics as early as first grade, I wouldn't have believed you. But here we are with the THIRD major project of the year.
And while much of the nation is counting down to summer break in days, we still have nearly a month left in the school calendar.

I have to say I'm thrilled with the way E's first diorama turned out. (Okay, it's not technically her first, but it's a lot better than the one we put together years ago.) In fact, I'm afraid it's a little too good, but I swear E did the project herself, with only some guidance and suggestions from me.

The assignment was to create a diorama of one of four habitats (she chose rain forest) and then research and create a model of a wild animal in that habitat (she picked her daddy's favorite animal: the orangutan). We made the orangutan out of model magic, and God bless those people at Crayola, they make the stuff in a range of colors that you can then mix to form colors of your own. It's fabulous stuff - lightweight, dries in a day, and super sticky so there's no fear of the limbs falling off. 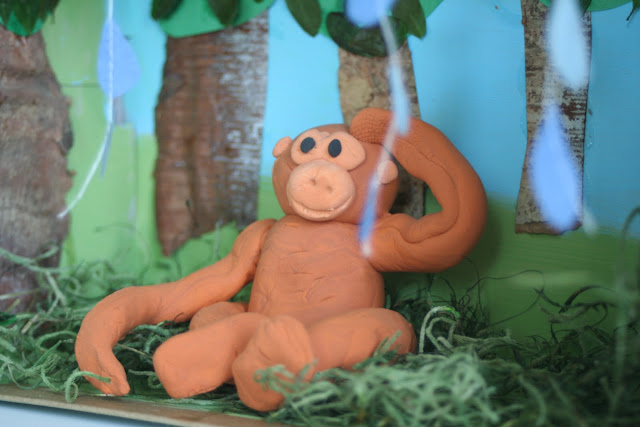 The raindrops were my suggestion, after seeing this "curtain" idea on Ruffles and Stuff. But E cut them out and helped sew them together. 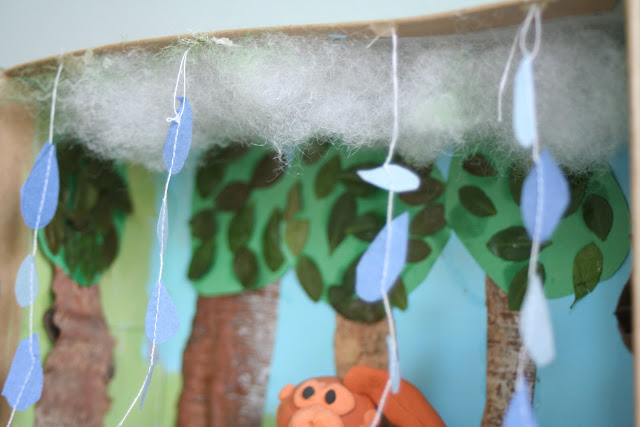 She used birch bark and boxwood leaves for the trees, cotton batting for the clouds, and dyed spanish moss for the forest floor. One of the benefits of having a crafting mom, is the closet is full of random supplies! The only thing we had to purchase for this project was the model magic.

We found a bunch of interesting websites for information on orangutans (National Geographic for Kids, Sumatran Orangutan Society, San Diego Zoo), and even I learned quite a bit. Did you know that instead of trial and error, orangutans will think through problems before attempting to solve them?

We also had to do a little field research, being lucky enough to have a local zoo with their own crazy orangutans. 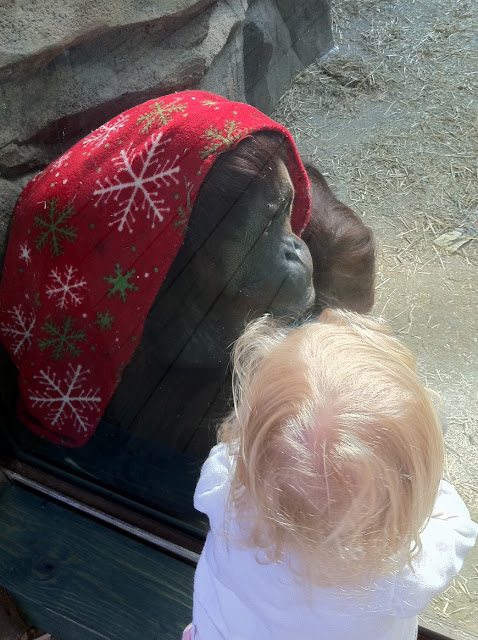 And of course we looked up books about the creatures. I loved this one in particular:

It's not exactly a book about orangutans, but it's great for any of your pint-sized animal lovers. Steve Grubman is a nature photographer and this book is full of his amazing pictures of fascinating creatures. Each page contains interesting fun facts about the animal as well as some behind the scenes info about the photography. Did you know that kangaroos can't hop backwards or that orangutans really are ticklish? I'm planning on getting this for my budding naturalist nephew for his birthday this summer!