I went to the mall yesterday, and it looked like Christmas had puked all over the place. For those of you who love to see the holiday season begin the day after Halloween, you'll have to forgive me. I refuse to deck the halls until after Thanksgiving. I love Thanksgiving. It's probably the least commercialized of the major holidays and focuses on gratitude, family, and food. How great is that? So expect the next two weeks to be full of turkeys, thankfulness, and lots of yummy recipes as we gear up for my favorite holiday!

There will be serious, moral, and educational books about Thanksgiving to come, so I thought I'd start off with a completely silly, nonsensical story. 10 turkeys take turns showing off their stuff (rollerskating, dancing, vine-swinging...) and each fall off of the fence on which they are sitting. The rhymes are cute and tongue-twisty, the illustrations adorable, and the turkey-antics sure to please the toddler or preschooler in your life! 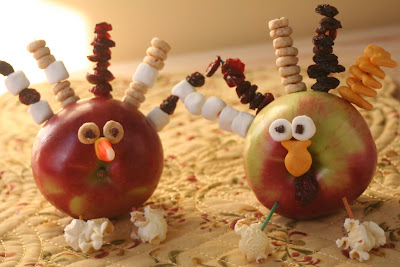 Surprise your kids with a healthy - and adorable - snack, or have them create their own. I've seen these pop up on the web, most recently from Marie at Makes and Takes - how on earth was she able to thread popcorn on the toothpicks? - and knew we had to make our own. So I scoured our cupboards and poured likely toppings into bowls. 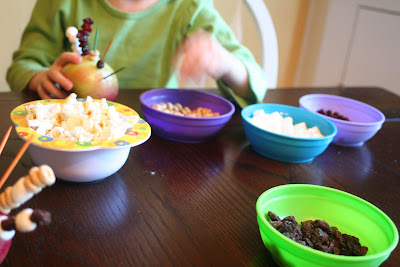 Little Page adorned her toothpicks with cheerios, craisins, raisins, and marshmallows. That left one empty toothpick. She insisted on my finding a fifth topping and when popcorn didn't work, we turned to goldfish. Having filled all five tail "feathers", I cut a toothpick in half and added mini marshmallows and raisin pieces for eyes. Then I stuck toothpicks in the front and one in the back to stabilize the turkey. Finally I could use at least a couple pieces of that batch of popcorn!

I thought we were finished, but Little Page said a turkey needs a beak and a "waddle". (Did you know it was called a waddle? Clearly they've been learning about turkeys in school.) A goldfish worked for the nose and a craisin filled in for the waddle. 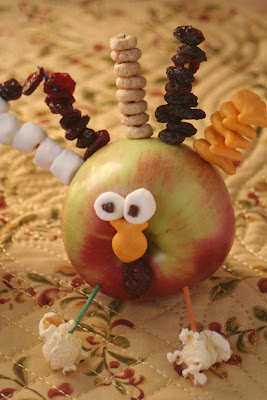 After I put the girls down for a nap, I looked at my turkey and decided Little Page was right. It at least needed a beak. I think the candy corn works better, don't you? 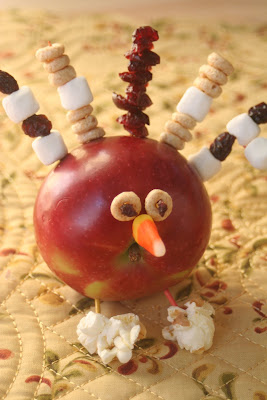