The Kate Greenaway Medal is the UK's version of our Caldecott Award and "is awarded annually for an outstanding book in terms of illustration for children and young people." When I heard the shortlist announced, I visited my virtual local library to place a hold on any copies they might have. Only two were available: The Way Back Home by Oliver Jeffers and Harris Finds His Feet by Catherine Rayner. 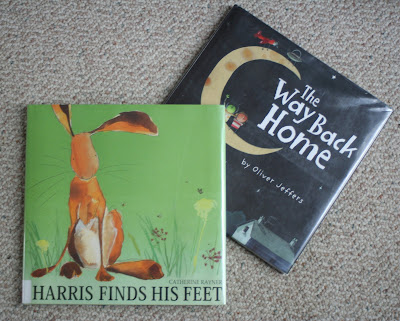 Both of these books boast fabulous illustrations. The Way Back Home features simple stick figures, but the artist does an amazing job at imbuing those little figures with a wide range of emotion. The illustrations, along with the story, are fanciful and fun. The story follows a little boy who takes his airplane up to the moon and there runs out of gas. He is frightened until he meets a little martian who is also stuck on the moon. Together they figure out a way to both get home.

I have to admit, Little Page was fairly disinterested in the book. I'm not sure if the subtle humor in the story was over her head or if she's just too girly to care about a little boy's space adventures. Regardless, it's not going to top her list of favorite books.

The second book was more of a success. Harris Finds His Feet has precious illustrations of a baby hare and his granddad. I'm not sure how the artist managed to capture the softness of the baby hare's fur, the energy of a rabbit in a full run, or even the feel of the breeze across a meadow. The story is about Harris, a young hare, and his Granddad who teaches him about the world. At one point I was honestly scared that the Granddad would be eaten by a wolf. He's not, but the book does communicate that his time is almost up and it is Harris' turn to explore the world. It's a simple story, but a sweet one about the love between generations. With father's day coming up, it might be a nice one to check out and remind your little one of the granddads in his life!