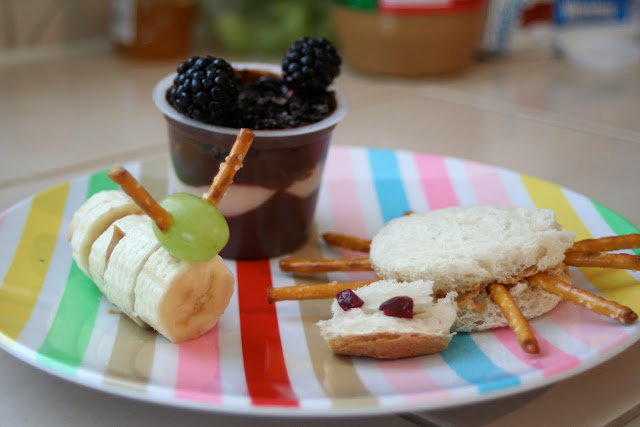 We're experiencing a freak warm front this week, which has caused every type of insect and arachnid to burst forth from the ground, sky, and water. To "celebrate" the multitude of bugs, I bought some potent bug spray, picked up a bunch of bug-themed books from the library, and made this special lunch for the girls.

E's plate contained a PB & honey spider sandwich, a banana caterpillar, and a blackberry beetle pot of dirt. E was excited about all of them until she saw a real insect (some sort of nearly-microscopic larvae) on the blackberry and decided to pass on dessert. Isn't the caterpillar cute? I got the idea via Teach Preschool from Family Corner. 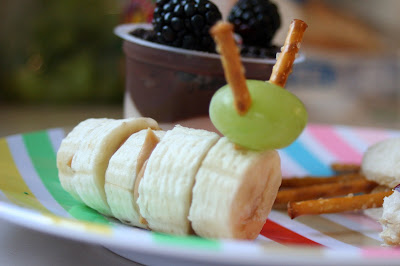 A received a PB & honey ladybug, ants on a log, and a caterpillar on a graham cracker leaf. I think the ladybug is my favorite. 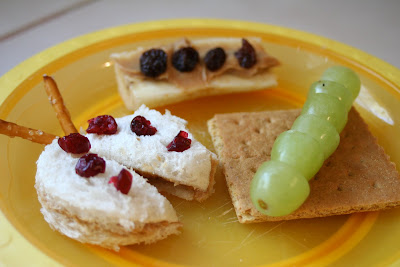 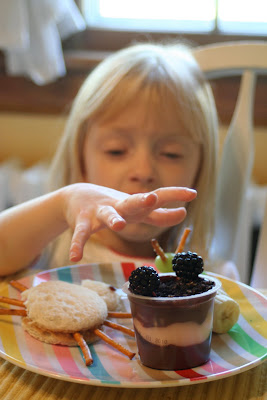 A doesn't speak much yet, but this smile said it all! In fact, she was so delighted with her lunch she felt compelled to share half of it with the dog. 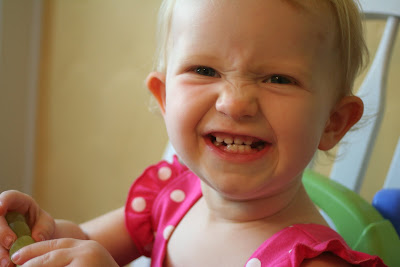 I love books with strong female characters, and Beetle McGrady is one such protagonist. She longs to be a courageous explorer and brags that she'd even eat an ant. Her friends jump on that boast and dare her to do so in the playground. When Beetle chickens out she feels like a failure. A chance for redemption arrives when a chef brings into their classroom meals containing real insects as part of a unit on different cuisines.

E's favorite part was "when she had an ant on her tongue! That's the silliest part." The illustrations are fun and colorful watercolors, and the story is sure to please your preschooler or kindergartener. The back of the book contains Beetle's tips for eating bugs: "#5 Feeling tired? Forget to take your vitamins? Termites are full of iron." I'm not sure about termites, but I did once eat a fried grasshopper. E doesn't believe me.