Achooo! - A Bad Case of Stripes

I don't know about you, but half the Facebook status updates I'm reading this week have to do with sick kids or sick parents. My sister posted twice this morning, first when she had to pick up one of her four children from school for an ear infection, and then when she had to pick up another for a stomach bug! We had our own stomach virus to contend with last week and a cold the week before that.

Since it seems that cold and flu season is here to stay, I thought I would do this week's theme around books to read when your child is sick.

The Book - A Bad Case of Stripes

After seeing this book everywhere, I finally got hold of a copy to check it out. The cover illustration is what drew me in. It shows a brunette little girl tucked into bed with her face, neck, and arms covered in rainbow stripes. With a cover like that, how could I not crack it open?

The story is about Camilla Cream, a girl who so deeply cares about what other people think of her, she won't eat her favorite food - lima beans. One day she discovers that she is covered in rainbow stripes. The doctors don't know what to do as the stripes worsen with every comment and suggestion from those around her. Eventually she melts into her own room, almost completely losing herself. All hope is lost until a little old lady gets Camilla to admit she likes lima beans. Once Camilla is true to herself, she is healed from her very bad case of stripes.

I have to warn you, the book is a little disturbing. Shannon reveals a dark sense of humor (and an obvious lack of respect for the medical community) throughout. I'd recommend it for school-aged children, although I did read it to Little Page and she thought it was funny. (She also loves to watch Tomb Raider, even when Lara Croft falls off a cliff or gets eaten by a dinosaur, so....) 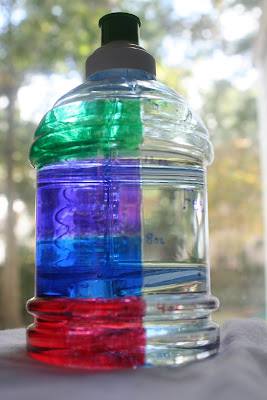 Doesn't seem to matter what your child is diagnosed with, the advice is the same: plenty of rest and lots of fluids. However, getting kids to drink enough when they're sick can be a challenge. Try this - Pick up a water bottle just for them. I bought this from Walmart for cheap. With permanent markers, draw lines at different levels on the bottle. Then set rewards for when your child drinks down to each line: maybe a favorite video, a popsicle, or a book! Hopefully if you can provide the proper motivation, they'll start chugging that juice and get better that much faster.