I can't sew. I can stitch a little, but I haven't taken on a solo sewing project since I was 13 and in Mrs. Dyche's home economics class. Today's craft inspired me once again to put foot to pedal (despite the fact I had no idea what I was doing). But first things first... the book!

The Book - In My Nest

by Sara Gillingham and Lorena Siminovich 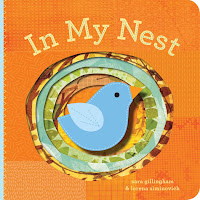 I like to feature board books occasionally, and this became an instant favorite. The graphic designer in me rejoices at the patterns, colors, and die-cut pages. Littlest Page loves the small felt puppet that's the center of the story. It's more toy than book, but the text is sweet and simple, and I think it will hold the attention of the littlest ones. If nothing else, it would look really cute in a nursery! Speaking of really cute...

Did I mention I can't sew? Well, after figuring out how to wind a bobbin and thread the needle, I threw caution to the wind and jumped right in. To tell you the truth, I became a little obsessed and haven't done much else over the past couple days. It paid off, however, because I finally created this little guy! 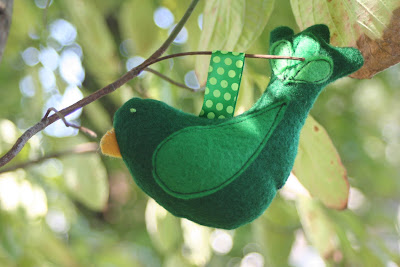 Isn't he a cutie? I think he'll look so sweet hanging in Little Page's room. Here's how I made him:

1. I used this template from Skip to My Lou to cut out the main bird shape, although I enlarged the tale so I would have more fabric to work with. I folded the felt in half and cut through both layers to create two bird shapes. Then I cut out the flourishes. 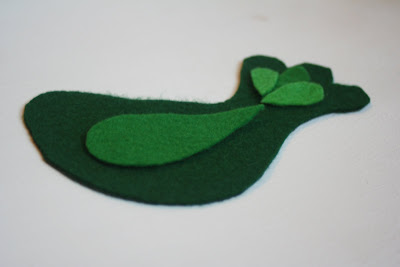 2. I sewed on each flourish using the sewing machine, and hand-stitched a little beak using two triangles of felt. Then I added an eye using embroidery thread. I attempted a "french knot," but I'm not sure I did it right. Still, it looks okay, so who cares?

3. Next I pinned the beak and a loop of ribbon so they faced inwards and laid a second bird shape cutout on top. 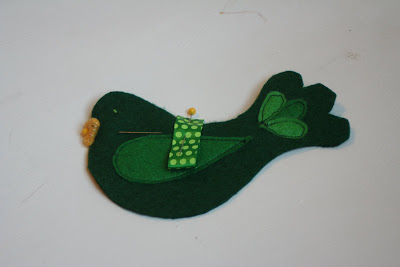 4. I sewed the whole mess together, leaving a small opening so I could turn it back inside out and stuff him. Poor birdie, how embarrassing! Don't worry, a little hand-stitching fixed him right up. 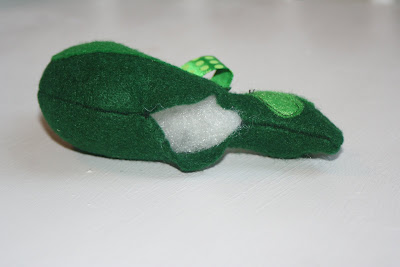 This was actually my third attempt at a bird. We won't discuss mutant birdie #1, but #2 didn't turn out half bad: 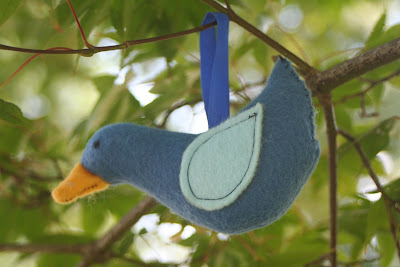 I'd like to try again using the simpler shape of this little guy but with a smaller beak and better-placed ribbon. Wait! Am I planning future sewing projects?!? Am I actually envisioning myself sitting at a sewing machine creating bigger and better things? I think I am! I think... I can sew!

Email ThisBlogThis!Share to TwitterShare to FacebookShare to Pinterest
Labels: board books, craft, sewing