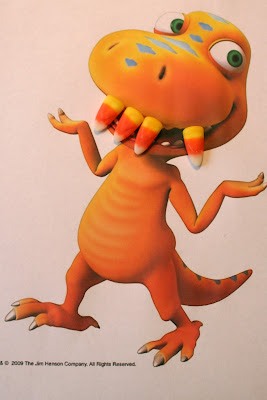 Now there's a smile you can't resist! E's teacher told me she needed some extra practice writing her numbers, so instead of giving her practice sheets, I devised this fun (and delicious) math game. I printed out a picture of Buddy from Dinosaur Train and placed a number of candy corn "teeth" on his mouth. E had to count the teeth and write the number down. Then I took away a few and asked her to write down the number of teeth now off the paper. Finally she had to subtract the second number from the first and write down the answer. 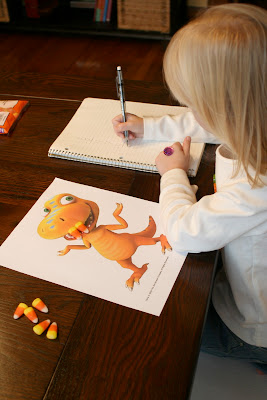 When she had done enough equations to cover the basic digits, I switched gears a bit. I placed one dinosaur tooth on the paper and asked her to count the stripes. Then I added a second, then a third, and so on. Each time she had to write down the new number of total stripes. After seven candy corn, I showed her the pattern she had made by counting by threes.

Of course at the end she got the chance to rot out her own teeth with Buddy's. :) 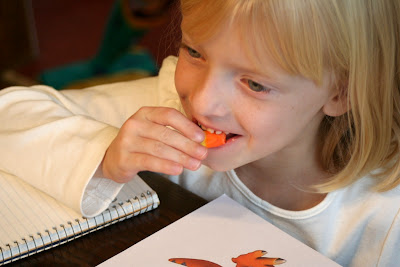 The illustrations in this book are amazing! The story... not so much.

The premise isn't bad: a little boy discovers a baby dinosaur at his window and decides to walk back through time to return the dinosaur to his home. They journey through the ice age, the time of mammals, and back to the Cretaceous and Jurassic periods, facing dangers in each era. The narration is dry, wordy, and a bit awkward at parts, but the paintings are truly beautiful. It's too bad the author didn't double the illustrations and make this a wordless story. I suggest you use the book as such and let your kids flip through the pages, supplying their own narration on each page.