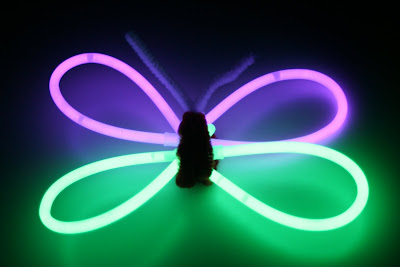 Who doesn't love glow sticks? Along with fruit roll-ups and ordering from the grown-up menu, glow sticks were a rare treat growing up. So when I saw packs of glowsticks in Target's dollar spot, I didn't hesitate to toss them in the cart. Inspired by Martha's glow stick spiders, I helped the girls create glow stick butterflies (because one spider craft in a month is enough). To make your own butterflies, you'll need four glow sticks, two connectors, and several pipe cleaners. 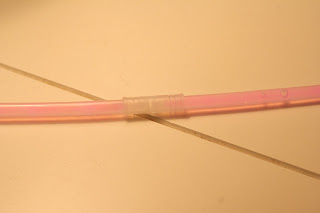 2. Loop one end of the glow stick up to the connector and attach with a rubber band. 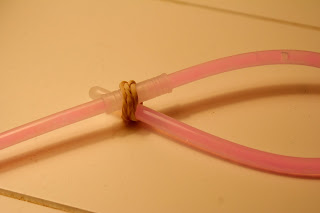 3. Loop the other end up and push through a couple strands of the rubber band to secure. 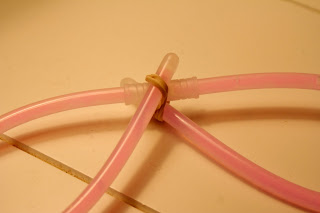 5. Hold the two sets of wings together and secure by wrapping a pipe cleaner around them both. You may need to use two pipe cleaners to fully secure. 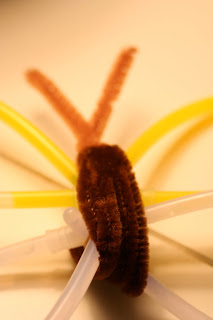 6. Thread a shorter pipe cleaner through the body of the butterfly and twist off to create antennae.

7. Turn out the lights and let those butterflies flutter! 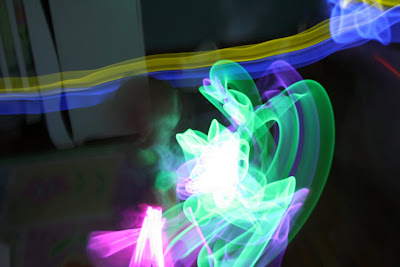 Be careful - in the wrong hands they become attack-butterflies! 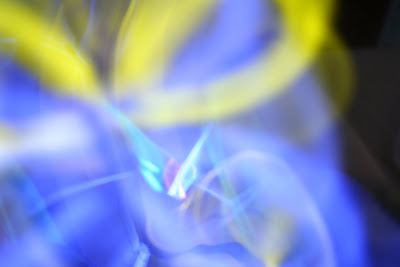 I think these would be beautiful hanging from trees during a backyard party or dangling from the ceiling during a sleepover! Ours preferred to dance and fly around the room. They're now in the freezer hopefully to be resurrected tomorrow night.

(think "luna moth") - this was the book I chose. I'm not a huge Miss Spider fan, but I can't deny that the computer generated illustrations are amazing. In this story, Wiggle can't sleep from fear of all the scary noises he hears outside. His mom takes him on a nighttime listening walk to place a face to all the noises. As he learns what makes each of the sounds, his fears are soothed and his view of the nighttime forest is altered.

It's obviously a good one for kids who are entering the "scared of the dark" phase, but the charming rhymes and engaging illustrations should entertain any preschooler.