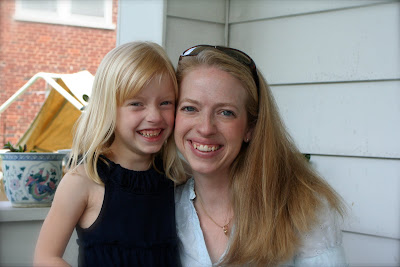 I spent this morning at E's pre-K graduation! My baby is all grown up and ready for Kindergarten. Seeing as I'm in a nostalgic frame of mind, I thought I'd share with you a few of E's recent school crafts and her book recommendations. (BTW, did you notice how I'm in the picture? I'm trying, ladies!) 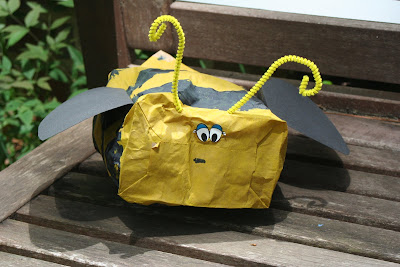 I thought this was such a clever use for a paper bag! The teachers pre-painted the bags yellow and then had the kids add the black stripes. The back of the bag is taped into a pointy stinger, and the kids added construction paper wings, sticker eyes, and pipe cleaner antennae. 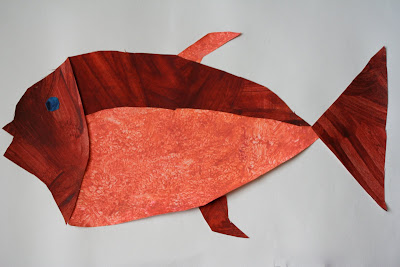 These turned out beautifully and were a wonderful lesson in cooperation. The children painted on large sheets of paper, filling the page with color. Once they were dry, the teacher spread the pages across the table and let each child choose two coordinating colors. They then traced a design on the pages and had the children cut out the shapes and glue them to a piece of paper. I wish I had taken pictures of the other kids' artwork as well - they were all different but equally impressive. 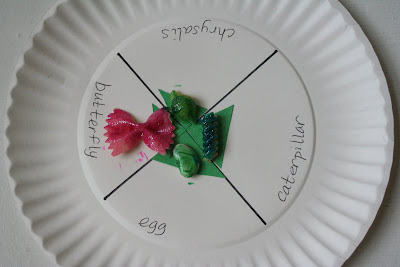 I thought this was such a clever way of teaching kids the life-cycle of a butterfly. A lima bean symbolizes the egg... spiral pasta is the caterpillar... a small pasta shell represents the chrysalis... and bowtie pasta finishes the cycle as the butterfly. The kids painted each piece and even added glitter to jazz it up.

I asked E for her three favorite books from pre-K and here are her recommendations in her own words.

Alexander and the Wind-Up Mouse

The story is about a mouse (Alexander) that meets a wind-up mouse (Willy). The wind-up mouse heard of a magic lizard that could make Alexander a wind-up mouse like Willy. Then Alexander went into the blackberry bushes and there appeared a bright colored lizard. Alexander asked the lizard if he could make Alexander into a wind-up mouse. The lizard said "bring me a purple pebble." At last, tired and hungry, Alexander ran all the way home. There in a box was all the children's toys. Willy said that it was Annie's birthday. They decided to throw away the old toys. And then Alexander ran and then came back and there he saw right there a purple pebble right near the box. Then he rushed all the way to the blackberry bushes and gave the pebble to the lizard. The Lizard said "what is your wish?" Alexander stopped what he was in the middle of what he was going to say. Then he said "turn Willy into a mouse like me." And then a flash of light the purple pebble was gone. He rushed back to his hole and then he heard a squeak - Willy was turned into a mouse! And they lived happily ever after.

I liked it because they were friends at the end.

A House for Hermit Crab

The hermit crab saw that his shell was very small. He wanted a new shell. Then he found a new shell. He put things on his shell. Then it got smaller again one day. Then another crab that was a girl looked at the crab who was a boy. The crab said "would you like to live in my shell?" She said yes. The end.

I liked the pictures. It looked like Eric Carle.


Going to the Zoo

It was a very busy day and two children and a daddy was going to go to the zoo and watch all the animals all day. They looked at a bear too. And then they returned home at night. In the morning they rushed to their mommy. And they were going to the zoo with their mommy. The end.

I liked it because it had a song, a book, and a tape!