Bling Out that Bike Helmet! 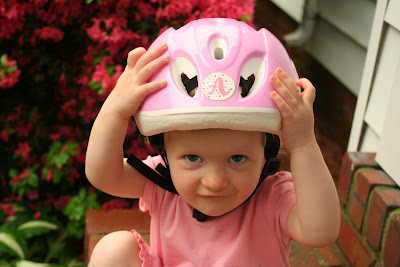 I'll admit it, I hate spending money on licensed character merchandise. Not that I have anything against Winnie the Pooh or Disney Princesses, but I don't want them on every t-shirt, tennis shoe, and rollerblade. So when I picked out a bike helmet for A, I chose a plain pink one... and then added some touches of my own! 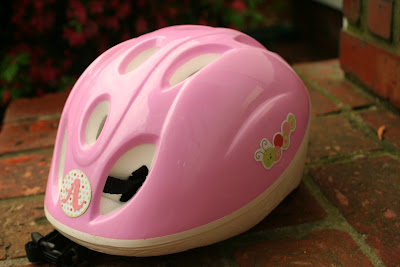 With a paint brush and some mod podge, I attached a few scrapbook paper cut-outs to personalize the helmet. Now she's sporting a caterpillar on the side, an initial in the front, and some uber-cute ladybugs on the other side! 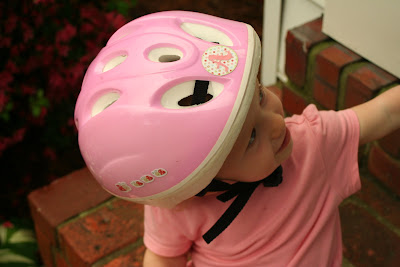 And just one more pic... because SHE'S uber-cute! 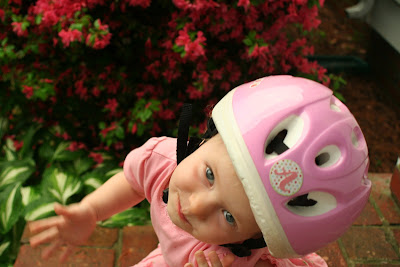 Duck on a Bike

You're probably familiar with David Shannon but have you seen this one? Duck borrows a bike and rides around the farm. Each of the animals who see Duck say something appropriate (like "moo") but think something disparaging (like "A duck on a bike? That's the silliest thing I've ever seen!"). After Duck makes a spectacle of himself across the entire farm, a crowd of kids arrives... all on bicycles. The next image is of the animals looking at a bike with a gleam in their eyes (it's the page that sold me on the book). Of course, they all hop on and take a ride around the farm. "Great idea, Duck!"

I love the illustrations in this book! They're funny. They're cute. They make the story. Just looking at the expressions on the animals' faces will make you chuckle. I only have one complaint - where is that duck's helmet?!

I'm linking up with:
- Get Your Craft On @ Today's Creative Blog