As new parents, we worked so diligently to get our difficult, fussy firstborn attached to a transition object: a plush elephant blankie, fondly named Ellie. Once the bond was formed, it became unbreakable. Bedtime... naptime... any separation from Mommy required Ellie's soothing presence. When she was two, the unthinkable happened and Ellie was lost. For two hours we endured our daughter's hysterics until, with flashlights and desperation, we located Ellie in a corner of the playground. The next day we spent $65 on eBay for a backup Ellie... it was worth every cent. Now, nearly five years after she entered our lives, we are ready to say goodbye to the little elephant. Yet that bond we worked so hard at forging is proving just as difficult to break. Our daughter cannot dream of giving up her faithful friend and constant companion. And perhaps it's too soon to push her into making that sacrifice. After all, she's bound to outgrow her blankie eventually. It's not like when she's thirty, with kids of her own, she'll still have a beloved and raggedy transition object lying on her bed... So obviously, I am not the best role model, but the dilemma remains. Share with me... how did you get your kids to say goodbye to their favorite blankie? 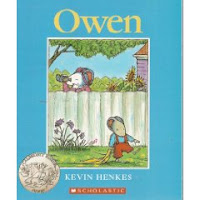 From the author of Julius, Baby of the World, this little mouse-tale follows Owen as his parents do their best to break him of his blanket-addiction. Owen's neighbor Mrs. Tweezers suggests "helpful" solutions such as dipping the blanket in vinegar or having the Blanket Fairy take "Fuzzy" away. Owen finds ingenious ways around these endeavors until it's time for him to start school. Unable to take Fuzzy to class, his mother comes up with the perfect solution: turning Fuzzy into a handkerchief.

Thankfully, E has never tried to bring Ellie to school, but I also don't think she would ever let me cut her up! I love Henkes' ability to capture the simple cares and joys of young children in his approachable characters. This is a good one to at least introduce the concept of letting go of that ubiquitous transition object.

When he was a baby, Joseph received a blue blanket from his grandfather. A few years later it is tattered and torn and his mother declares it must be thrown away. "Grandpa can fix it!" declares Joseph, and Grandpa turns the blanket into a coat. When the coat becomes too small, Grandpa turns it into a vest. This cycle repeats, following Joseph's growth as the blanket transforms into a tie, handkerchief and button. When Joseph loses the button, he turns it all into a wonderful story!

Gilman retells this Jewish Folktale with gentle narration and beautiful illustrations. It's a sweet tale of growth, transformation, and the love of family.