I said we were doing food-themed books this week. I didn't say anything about healthy food! Trust me, my little toothpicks need the extra calories... even if I don't!

The Book - The Donut Chef

I love Bob Staake. Maybe it's his yummy subjects; maybe it's his cute and clever rhymes; it's definitely his fabulously colorful illustrations. The Red Lemon is one of my favorite books, and The Donut Chef is nearly as good.

When a chef opens his donut shop on a quiet block, it quickly becomes a success. Another donut chef vows to put him out of business by opening a donut shop next door. The two shops try to out-do each other with wilder donut offerings until a little girl reminds them the flavor most people love best.

It's a simple and silly book, but so much fun!

The Snack - How Not to Make Your Own Donuts 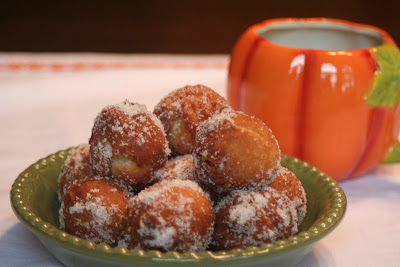 First, don't make them in the morning. Instead, take your daughter 30 minutes away to a farm for her first field trip where she'll spend the entire time chasing the boys in her class and then cry on the way home because you wouldn't pay extra for a pony ride. Then spend an hour trying to get your toddler to take a nap.

When you give up on the nap (for her and yourself), pull up this donut recipe. Substitute butter for shortening since your shortening expired before your second daughter was born and you thought it best to throw away. Ignore the instructions on the recipe because who really has time to cream and sift, anyway? Instead, throw all the ingredients into a cuisinart and let your daughter push the on button. Fry up small balls of the sticky dough, trying not to drip burning hot oil on your toddler's head as she attempts to climb your leg.

You'd rather head to Dunkin Donuts? I don't blame you. If you still want to try homemade, here's the recipe from Food Network. It honestly wouldn't be difficult if you had some time and a quiet space to work. The dough was too soft for me to roll out (I'm all thumbs when it comes to working with dough). Instead, I spooned little balls to make donut holes.

Reserve 1/4 cup of the flour for the board. Combine the remaining flour with the baking powder and set aside. Cream the shortening, 1/2 cup of the sugar, salt, nutmeg and cinnamon. Add milk and well-beaten egg and stir. Then add the flour-baking powder mixture. Work into a soft dough and roll onto the floured board into a 1/4-inch thick sheet. Cut into the desired shape and fry in the oil, heated to about 375 degrees F. Turn donuts frequently while frying. The fat should be hot enough to give the donuts a rich golden-russet color in 3 minutes. (You want them to be pretty dark to ensure they've cooked all the way through.) While hot, roll donuts in remaining sugar. This recipe will make about 15 good sized donuts.

Regardless of how you make it, when the donuts are finished, stick your children in front of a video, leave the mess in the kitchen to clean later, and enjoy a small plate of donuts and a mug of hot apple cider in peace! 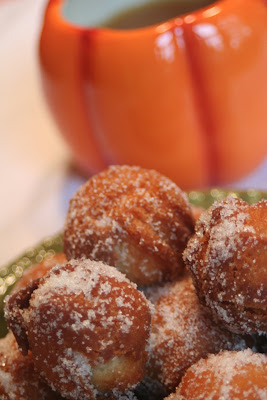