If you want to make an apple pie, you need to gather flour, eggs, sugar, salt, cinnamon, butter and apples. Go to the market to get the ingredients. But if the market is closed...

Well, if the market is closed you'll need to travel to Italy to pick the wheat, visit England to grab a cow, cut down sugar cane in Jamaica, gather sea water from the ocean... you get the idea. The illustrations are colorful and stylized, a perfect match to the international setting. Written in second-person, the story hits a great tongue-in-cheek tone throughout, with such throw-away lines like "you'll know she's an English cow from her good manners and charming accent." With this gentle and ironic humor, children learn geography and the origins of the food they eat. Of course, the back of the book includes a recipe for apple pie. Which leads us to... 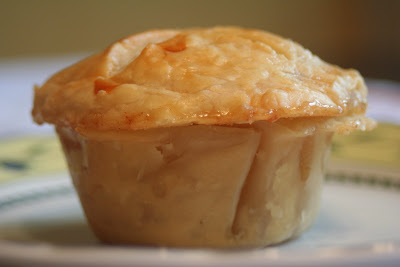 One of the problems with being a blogger is that you think you have an original idea, then you google it and realize you are #357,092 to have that idea. So, I'm apparently not the first person to decide to make baby apple pies in muffin tins, but that doesn't mean they weren't delicious!

Ingredients:
Mix your apples, sugar, cinnamon, and lemon juice in a bowl. Cut out six 4-5" circles of pie crust. I used an inverted Gerber plastic bowl and traced around it with a knife. Tuck each circle of dough into the muffin tin and spoon the filling inside until almost heaping. Cut six 3-4" circles of pie crust. I flipped the bowl around, indented the dough with the bottom of it, and then cut a little larger than the indent. (You know, circle cookie cutters would probably be much easier, but when do I ever have the right tools?) Place the smaller circles on top of each pie and pinch the edges to close. I pinched them under to make it look more like a pie, but if you pinch the bottom up over the top they'll be easier to take out of the tins. Brush with the egg wash, sprinkle with sugar, and cut slits in the top with a knife.

Bake at 375 for about 15-20 minutes. Keep an eye on it and pull out when the tops are golden brown and crispy. Let it cool for about 10 minutes before removing from the tins. Good luck with that, by the way. I suggest trying to take them out when you're in a very zen-like mood... or when your children are out of earshot! Of course, if you mess up and one falls apart, you'll need to hide the evidence... 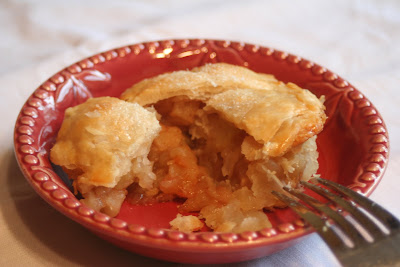