I've had so much fun finding books themed around color. To finish up the last two weeks, what else could I do but focus on rainbows! It has been Little Page's ambition to see a rainbow for years now. Just last month, her wish came true. We were at my mom's house on the Bay for my nephew's 5th birthday party. After a brief rainstorm, the sun came out and the most amazing rainbow appeared right in front of us. I mean literally in front of us. The end of the rainbow was right there on the beach! Little Page was beside herself, and I have to admit I was rather giddy myself. 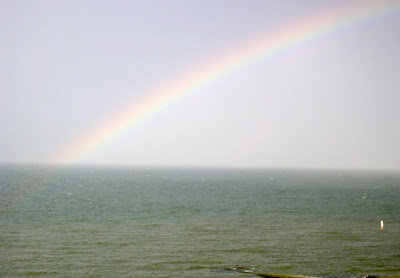 The Book - What Makes a Rainbow? 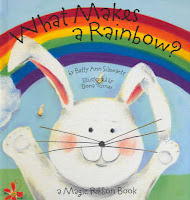 Honestly, the only cool thing about this book is that it includes ribbons that slowly create a rainbow as you turn the pages. But that feature is cool enough to earn it a LPT recommendation. As you turn each page, a new ribbon stretches into place, creating another band in the rainbow. It only took a few readings to teach Little Page not only all the colors in the rainbow, but the order in which they appear. The story itself is a slightly boring one about a little rabbit who is sent on a quest by his mother to find out what makes up a rainbow. I found it's too long to hold the attention of Littlest Page (12 months) and too simple to engage Little Page (4 years). The illustrations are colorful, but cliche and too monochromatic to be engaging to babies. But, still, the ribbons are very cool.

Because I can't rave about my main book pick, here's another rainbow-themed book you may want to look up:

A Rainbow of My Own 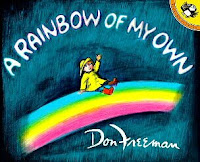 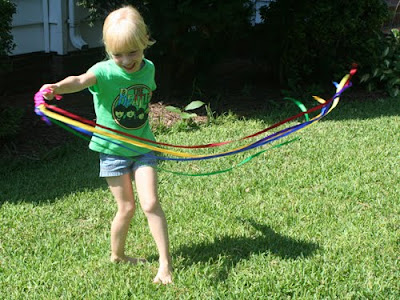 You can't get much easier than this craft. For the base, I used a large bubble wand, the kind that comes in the ginormous containers of bubble juice. (Yes, we buy our bubble juice by the gallon!) I picked up spools of ribbon in red, orange, yellow, green, blue, and purple, and cut each to be about 4' long. Then I simply tied each one in rainbow-order to the loop in the bubble wand. To practice tying, I had Little Page help me tighten each one. After tying the ends into tiny knots to keep the ribbon from unraveling, it was ready for my dancing queen!

For Littlest Page, I wrapped foot-long ribbons around a teething link and knotted at the base and on each tip. 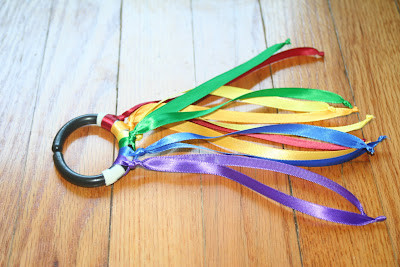 Email ThisBlogThis!Share to TwitterShare to FacebookShare to Pinterest
Labels: board books, colors, craft